The BeatSwap project is an exciting inter-school music project designed by Andy Fowler of RhythmZone and Claire Hurst (Deputy Head) of Oxford Road Community School. Follow us throughout the year to see children from four Reading schools develop and perform their own piece of world percussion music.

It's the last day of term today and I just collected loads of video taken from the BeatSwap taster session I ran at Oxford Road Community School. Thanks to Sylvia Beeton for arranging this - I had to upload it as quickly as I saw it. Great stuff!
A few of the girls wanted to add some of their dance moves to the music, so we decided to take the party outside! Pupils have been enjoying dance classes in school and as you will see, they are clearly inspired! Quite a few passers by had stopped at the school gates to enjoy the show and share our smiles...

This short video gives two takes of our performance. The first half shows off our drummers (and the girls pretending to be shy). In the second half (1:08 onwards), you'll see a polished masterpiece where you get a real flavour of the characters within the school! (2:00!!!) The girls only took about 5 minutes in between takes to find their confidence and arrange this GREAT dance routine. Thanks too for the awesome drummers holding down the groove. Enjoy!
Posted by Andy Fowler at 15:40 No comments:

Churchend Academy (Ofsted - Outstanding) is a wonderful school with a supportive and motivated staff team. Every year group has African Drumming classes with me for a whole term each year, so when I went in to talk with the children there about the BeatSwap project, they felt comfortable telling me exactly what they expected.
The children got quite excited about the project and started to visualise their final performance. They requested that we invite the Queen - and asked if we could demonstrate our new drumming skills at the London Eye! 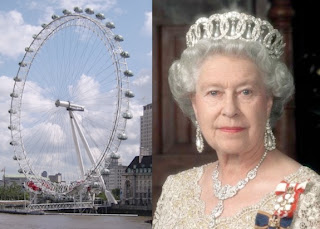 I encouraged them to keep 'THINKING BIG' and the ideas continued to flow. Other pupils asked if they could perform various instruments, if we could get on the local news and radio, and if we could design our own t-shirts.
I left with a real buzz and felt that they were totally on board with the adventure we were beginning. Here's a snippet of the ideas they shared: 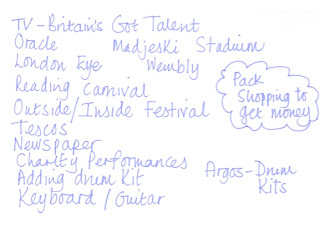 In September 2010, after months of planning, we finally submitted our Youth Music funding application for the BeatSwap Project. We quickly realised that although our application was unsuccessful, the planning process had helped us to develop a forward thinking project that would benefit children and schools way beyond those initially involved.
The application had asked us to work in partnership with other organisations or schools. We chose three local primary schools (serving children from a range of backgrounds) that I had already established working relationships with. This seemed to be a great opportunity for me to give something back to them and say 'thank you'... 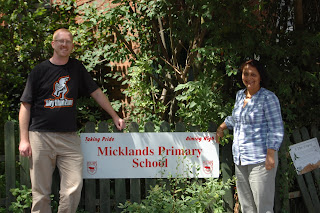 So how were we going to get the children and schools to benefit from these new school partnerships? What would the legacy of the project be? What performance opportunities would we provide? How would we develop new young music leaders?
Together, Claire and I looked at the work that I had been doing at the schools so far and came up with the BeatSwap concept. All year 6 children (ages 10/11) from the four partner schools would
be invited to participate. After taking part in taster sessions during school hours, children could sign up to a series of after school clubs and the project would unfold.
Schools A and B would be paired. As would schools C and D. Two sets of 6 week clubs (at each school) later and each of the children would be prepared for their BIG final performance, having:
The whole project was planned so that it would provide loads of opportunities for large and small group work, backed up by ICT links between the four schools. We also have links with a host of local events that would all be happy to provide a public platform for our children.
A further aspect of the project was the development of young music leaders. It was hoped that we would be able to support participants to build their confidence, musicality and leadership skills by helping them to set up and run their own lunchtime drumming clubs. This planned legacy for the project now relies on us securing external funding. Interested? The money would cover drums that were to be shared between the four schools and would also allow us time to support and mentor promising leaders. Watch this space!
Each of the schools had originally committed to contributing £750 towards project costs. When we found out that our funding application had not gone the way we had hoped, we asked them if they were still willing to commit the cash. Obviously they all said 'YES"!
We put together a letter to distribute to all year 6 (2011/2012) children. To help each school cover their initial £750, we highlighted text (requesting a payment or contribution) that they could modify according to their own requirements.
BeatSwap is now under way. With a few of the promotional sessions completed, Claire and I are both really excited to be leading this new project for children within our community.
Take a look around and enjoy the BeatSwap journey with us! 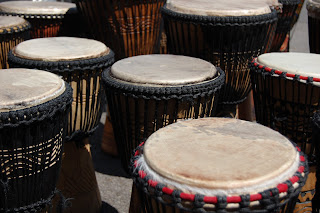 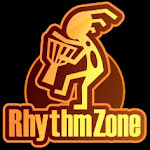